On Friday 19th September I attend the opening of ART-Index, an exhibition of Russian Contemporary Art in Arsenals, the gallery with the amazingly steep and scary staircase I visited in my first week in Riga. The exhibition is part of a unique season of events celebrating Russian culture in Latvia. The place is packed and buzzing. After the speeches a very groovy band called Beat Retro Scratch start playing a fabulous mix of retro jazz, folk and contemporary music in the foyer. 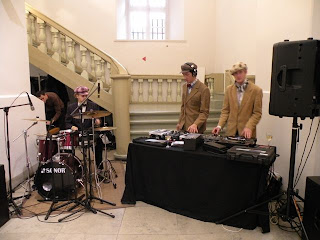 In the main gallery a group of ballerinas wearing classical tutus are performing as part of one of the art works. It’s very crowded and I push my way through to see the rest of the art – sculpture, painting, photography, video – there’s a lot of work and my first impression is that it’s all very exciting. There’s a Russian aesthetic present here that I can’t quite define – it’s dramatic, strong, and confident. I’m taken by the ballerinas, a series of rather Dadaist reconstructions of military objects, a big pile of dirt that sits in the centre of one of the gallery spaces, and a bookshelf filled with loaves of rye bread. Some of the videos are also quite compelling. I join the crowds around two large cardboard boxes and peer into their open lids. Inside one is a projection of a miniature sleeping Lenin – but his sleep is is troubled and he tosses and turns in his formal black suit. Inside the other box is a projection of three people in a room – a naked woman on a bed, a man on a toilet and a man at eating at a table. The two men rotate their way clockwise around the room - eating, having sex with the woman and shitting - a comic little scene about the merry-go-round of life. I’m also drawn to a video of close-ups of raw eggs and spaghetti accompanied by Tchaikovsky; a series of large scale photographs of sausages, rye bread and cheese that have been arranged to mimic Russian Constructivist paintings, and a group of mysterious monochromatic landscapes. 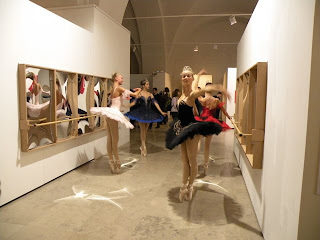 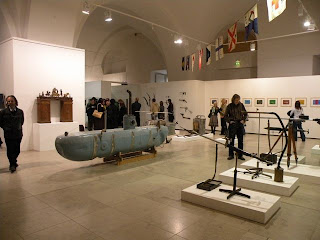 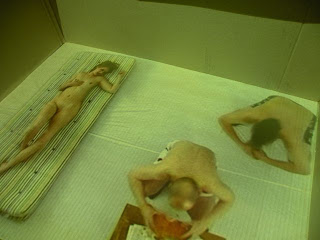 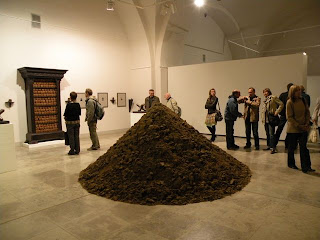 As I’m taking photos of the landscapes, I hear someone call out my name and it’s Jegor Jerohomovičs, the journalist who interviewed me last year for an article in Riga’s main newspaper, Diena. Jegor speaks perfect English, Latvian and Russian and we chat for a while in Latvian, both agreeing it’s a great show and that we should keep in touch while I’m here. Then I watch the band for a little longer and meet their manager, Zoja. The band don’t have any CDs out yet, but there is more information about them on My Space.

Later I go to the K Suns Cinema to see a Belgian movie at the Arsenals International Film Festival. The movie has English subtitles but most of the people are wearing headphones through which they hear a Latvian translation. The next day Anda Klavina and I see another film, My Winnipeg, a fantastic black and white movie by Canadian director Guy Maddin, in which he recalls his childhood growing up in Winnipeg. Maddin employs actors to play his various family members and then merges his recreated memories with documentary footage of his hometown. The result is a humorous but deeply moving narrative of Maddin’s early life.

I am sick with some sort of virus for about a week. Anda suggests I take Riga Black Balzam, a mixture of secret herbs, roots, oils, berries and pure vodka (45% proof) that was developed in the mid 1700s and was traditionally sold in pharmacies. It’s black and very potent, both bitter and sweet in taste, and the day after I take my first dose, I magically feel much better. I take another dose the next day and continue to improve. The drink has won various international awards and when Catherine the Great of Russia visited Riga, she was apparently cured of illness after taking Riga Balzam.
Posted by Brigita Ozolins at 12:27 AM 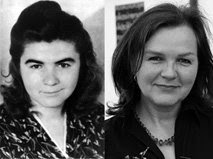